Palada payasam (paal ada payasam made with rice ada and milk) is one of the most popular South Indian Kerala style milk based payasam or kheer recipe (Indian style pudding).

Payasam is simply the Malayalam word for Indian style kheer/pudding (payasam is used in other South Indian languages like tamil as well).

Palada payasam made using rice ada takes longer time to cook than the aval payasam which is more easier to cook.

What Is Ada Payasam?

Ada was traditionally prepared at homes using rice flour mixture which is  spread over banana leaves, which are then wrapped in cooked in boiling water.

Nowadays, we can find ada in Indian grocery stores that sell Kerala groceries (its not easily available in all stores though if you are outside India).

Ada payasam is dessert prepared using the ada, the most popular kinds being palada payasam which is a milk based pudding like dessert and also ada pradhaman which is prepared using coconut milk and jaggery as main ingredients.

How To Cook Rice Ada?

To make payasam, you have to cook ada in advance for the most of the recipes or you can cook ada while you make the payasam like in this easy palada payasam recipe.

If you decide to cook the ada in advance, you will need to boil some water and cook the ada until its cooked enough and then you can use this cooked ada to make payasam.

Even if you cook the ada only when you make the payasam like in this recipe, you have to soak the ada first so that they will be soft once you start cooking the payasam. Otherwise it will be difficult to get it cooked properly.

What Is Palada Payasam?

Palada payasam is made using ada (rice flakes that we learnt about above), milk, sugar etc. It is basically a milk based creamy, Indian style pudding made using rice flakes.

How To Make Palada Payasam?

To make this easy palada payasam with condensed milk, we first soak the ada in hot water for few minutes so it will be soft. Then drain the water used for soaking ada and wash the ada in cold water few times.

Heat ghee in a pan and add the ada, also add milk, cardamom and sugar, stir well and bring the mixture to a boil (while you stir often).

And then we cook the ada until its almost cooked (around 10 minutes by cooking in closed lid for few minutes which is explained in detail in the recipe card).

Then we also add the condensed milk, stir well and cook for another few minutes until the ada is cooked soft enough for your preference.

If you wish, you may also fry cashews and raisins in little ghee and add it to the prepared payasam.

To achieve this, many recipes use a pressure cooker method.

However, this is not pink palada (though it looks slightly pink in color when I look at some of the photos now :)), but this is an easy palada payasam recipe, following which you can make delicious palada payasam easily at home.

More Payasam Recipes In This Blog With Condensed Milk:

You can make more delicious payasam varieties with condensed milk. They are creamy, delicious and easy to make. 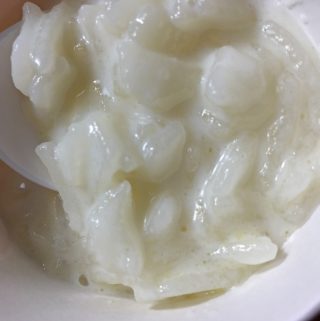 In case if the payasam thickens, you may add little more chilled milk and mix well as needed. You may also fry 1 to 2 tablespoons of cashews and raisins in ghee and add those to the prepared payasam if you wish.