There are different kinds of egg noodles available in the market and there are a few popular kinds I have tried in this buttered noodle recipe which works great with instant pot.

There are other types of egg noodles like tagliatelle pasta egg noodles as well, which I have to try in the instant pot yet and I will update the post when I try!

How long to cook egg noodles in the instant pot?

I cooked the egg noodles for only 1 minute time in the instant pot along with a natural pressure release time of 12 minutes.

The total time in the recipe to includes the time for the instant pot to come to pressure and also the time needed for a pressure release.

I do not recommend quick release for pasta for safety reasons and to avoid any hot liquid mess.

The noodles is on the softer side with a creamy, saucy texture as we do a natural pressure release method for this recipe, for about 12 minutes.

However why I love making pasta and noodles in the instant pot is because once you add the ingredients, it does its job without you being there so its really easy that way since we don’t have to babysit the pot and so the work is much lesser.

I tried this with Amish narrow noodles as well as wide egg noodles.

From my experience, regular spaghetti noodles need more water to cook and they do not get cooked fast like the egg noodles.

So I always use more water to cook the regular spaghetti noodles which turns out perfect every time.

However, this is again different for thin spaghetti noodles or angel hair pasta noodles since they are thin noodles that cook faster.

You can learn here how to make cheesy thin spaghetti noodles in instant pot!

This instant pot noodles as you see in above picture is prepared using Amish style narrow egg noodles and it is delicious!

This is a very simple and easy kid friendly noodles recipe too, and the recipe is flexible in terms of flavor and you may add more suitable spices and flavors to this dish, as you like. And this is my 400th blog post in this blog as well!!

This is a creamy instant pot buttered noodles recipe with creamy texture coming from the butter and more flavor from the onion and garlic powder that we use.

You may adjust the flavors as you desire.

If you do not want to use garlic or onion powders but want to try some other flavors, you can easily do that!

If you like to additional black pepper powder or dried oregano powder (than recommended in the recipe), you can just sprinkle it on the prepared buttered noodles and enjoy!

I initially used the Amish style narrow home style egg noodles (which had a cooking time of 12 to 20 minutes on stove top according to the directions in the package for stove top cooking, but its cooked faster in the instant pot!) for this instant pot buttered noodles recipe.

I have tried this with other kind of egg noodles like the wide egg noodles and so adjusting the cooking time accordingly which should work for most of the egg noodles (they cook really faster!).

We use the following ingredients to make the buttered noodles in instant pot.

Ad the egg noodles to the instant pot and also add the salt, onion powder and garlic powder (sprinkle across the noodles).

Pour the water through top of the noodles and place the butter on top (preferably sliced into cubes).

Close the instant pot with lid in sealing position, and pressure cook in high pressure for 1 minute.

Once the pressure is all released, carefully open the lid. Add the olive oil, milk and cheese, stir in everything gently.

Sprinkle the oregano powder and black pepper powder and the delicious buttered noodles is ready!

Can you use spaghetti noodles for preparing buttered noodles?

Spaghetti noodles is very tasty for preparing buttered noodles but may need more water and more cooking time for preparation.

As I told earlier, egg noodles tend to cook much faster.

So if you use spaghetti noodles, it usually comes as 16 oz noodles, for which I recommend start using 5 cups of water but you have to see if the water is barely covering the noodles and if needed you may add a little more water.

I have noticed that the egg noodles actually cook perfectly even if all the noodles are not covered in water so do not add more water than recommended for the egg noodles.

Also use 3 minutes of cooking time for spaghetti noodles instead of the one minute cooking time that we use for egg noodles here.

How To Make The Buttered Egg Noodles Taste Better?

Plain buttered egg noodles is awesome because its easy to prepare and delicious on its own and its kid friendly as well.

However, you can always make egg noodles or any buttered noodles taste even better by simply adding flavors of your choice.

I have used tried using sauteed onions along with garlic powder, oregano powder, black pepper powder etc for more flavor. You can even sprinkle more spices like red chili flakes if you like it spicy.

Most of the time, we go for buttered noodles as a side or when we are in a hurry, so adding onion powder, garlic powder and any flavor of your choice will help you make flavorful buttered noodles which is also more easy to do!

Also you may use vegetable broth instead of water if you want to improve the flavor of the buttered noodles.

See more flavors you can add in for making the buttered noodles taste even better (some of these we have used in the recipe):

red chili flakes – to make it spicy if you like

broth  instead of water – to add more flavor

Variations for different kinds of pasta to make buttered noodles

So here I am giving you an idea on how to make buttered noodles or pasta with other kinds of pasta noodles as well based on the pasta to water ratio and cooking time I have used for different kinds of pasta shells.

So here you can read the buttered egg noodles recipe in detail. 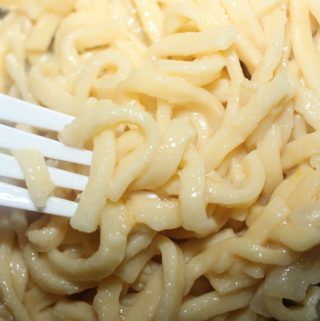 If you are using 16 oz of egg noodles use one more cup of water and one more tablespoon of butter and carefully do a manual release after about 12 minutes of natural pressure release.  If there is little liquid left once you open the pot, this extra liquid is good as it will make the pasta more creamy and saucy as it sits for a while.  The noodles will become more delicious as it sits in for a while which gives more time for the flavors from butter, garlic and other flavors to blend in. But for the best results, you can serve it hot as soon as its prepared! You can also saute an onion (finely chopped) before adding the pasta instead of using onion powder if you like, which is even more flavorful (I have tried both ways and while adding onions is more flavorful, adding onion powder is more easy to do.).