Korean or Japanese style banana milk drink made using almond milk for a delicious breakfast or snack! Banana milk using bananas, milk and sugar is popular in Korean and Japanese cuisines and we make it in this recipe using almond, without losing any deliciousness!

This is not a traditional recipe for banana milk, as it usually uses milk, but this is a simple, easy but delicious recipe using almond milk, inspired by Korean style banana milk.

This recipe is also vegan since we substituted milk with almond milk and so you can enjoy this drink if you are on a vegan diet too!

If you want to replace almond milk with whole milk or skim milk, you can do that too!

I have also made this variation of chocolate banana milk with almond milk which is another delicious drink perfect for chocolate lovers!

What is banana milk? How is it different from banana milkshake or smoothie?

Banana milk is popular Korean street drink which is delicious and easy to make using ripe bananas, milk and sugar.

So while both drinks have some similarities in terms of ingredients used and also taste, they are not exactly the same.

Though banana milk can be quite similar to banana milkshake in preparation and taste, it is more different from a banana smoothie.

Banana smoothie is more thick and frosty while banana milk is more thin in texture.

If you want more of a smoothie like texture, you may use frozen sliced bananas and also you may reduce the amount of liquids in the preparation, to make it taste more like a smoothie.

To make Korean style banana milk, you shouldn’t reduce the amount of almond milk (or milk) or water we use in this recipe!

In this recipe, we use almond milk which makes it a plant based drink.

If you do not have almond milk, you can use regular whole milk or skim milk to replace almond milk, if you don’t want to keep it vegan.

In fact, in traditional Korean or Japanese banana milk, cow’s milk is used in the preparation.

If you want to keep this vegan and want to subtitute almond milk, you may use coconut milk (if you like the flavor of coconut milk) or you may use oat milk, cashew milk etc which are all great plant based alternatives and substitutes for almond milk.

So here is how you can make homemade Korean style banana drink.

How to make Korean style banana milk with almond milk?

To make this homemade vegan banana drink, we use the following ingredients.

If you want a thick, creamy and frosty smoothie like texture, you may freeze sliced bananas in advance to make the drink.

Add the chilled almond milk (or coconut milk or regular milk or water based on your preference) and chilled water also to the blender.

Also add vanilla extract, banana extract, cinnamon powder (if using) and maple syrup (or sugar or any sweetener of your preference), blend everything until smooth.

Serve immediately for best results or keep it chilled in the refrigerator in bottles or jars or pitchers for another couple of days!

This banana almond drink tastes the best when it is served immediately once you prepare it!

If you wish to store this drink for later use, you may transfer the drink to glass bottles or any pitchers and keep it refrigerated for another 2 to 3 days.

Make sure to serve it chilled for best results, as it will not stay fresh if not refrigerated.

For even longer storage, you may transfer the drink to ice cube trays and freeze it for more time.

Below you can get the recipe for this delicious, easy, homemade banana drink in detail. 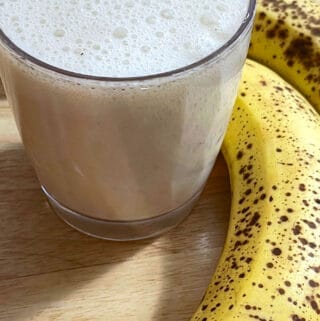