They are also perfect for Thanksgiving breakfast or brunch too! Easy to prepare during the busy mornings and goes well with any kind of toppings like maple syrup, pancake syrup, butter, more cinnamon, apples, bananas etc.

What Are Cinnamon Pancakes?

And they are perfect for fall/autumn season morning breakfasts or anytime of the year as long as you love the cinnamon flavor!

These are different from cinnamon roll pancakes.

While cinnamon roll pancakes resemble much like cinnamon rolls with fillings and cream cheese frosting for topping, they are more kind of a dessert in the form of pancakes and they are super delicious too!

However, these cinnamon pancakes flavored with cinnamon powder are super simple but very delicious as well, and perfect for any busy day.

They are much more easier and faster to make than cinnamon roll pancakes when you want to quickly mix up the pancake mix or batter to make homemade pancakes for breakfast.

Cinnamon is a spice which is very popularly used in cooking and baking and has amazing health benefits.

It is a ground spice made from cinnamon sticks which is also used as whole in cooking for its aroma and flavors.

For the best results and health benefits, always make sure to use good quality, organic cinnamon if possible.

So here is how you can easily make cinnamon pancakes following this easy recipe.

How To Make Eggless Cinnamon Pancakes With Self Rising Flour?

We use the following ingredients to make easy, simple and delicious cinnamon pancakes from scratch at home.

butter as needed for greasing the pan

Add the self rising flour, sugar and cinnamon powder in a large bowl. Mix well so all ingredients are well blended.

Add milk, vanilla extract and olive oil to the dry flour mixture, mix everything well to combine to make the pancake batter.

Make sure there is no dry flour left in the bowl.

Heat a non stick pan or iron skillet, grease with little butter or oil if needed.

Add one ladle of batter to the pan, wait until bubbles appear on top and the bottom side is cooked (takes about a minute). Adjust the heat between medium to low as needed to cook the pancakes.

Once the bottom side of the pancake is cooked, carefully flip the pancake and cook the other side too.

You may top with even more cinnamon powder (a little) or brush with a little butter on top if you like.

Transfer the cooked pancake to a serving dish.

Similarly cook all pancakes until the batter is all finished.

Top with maple syrup or fresh fruits like sliced apples or strawberries or bananas as you wish!

pancakes with self rising flour and eggs

How to substitute self rising flour with all purpose flour?

How To Make Vegan Cinnamon Pancakes?

To make vegan pancakes, you may use almond milk instead of whole milk and also use oil for greasing the pan, as needed for making the pancake.

You may also try any other plant based milk like coconut milk, oat milk etc depending on what flavor you like the best.

How To Store The Pancakes?

If you are not serving this right away, you can store the pancakes in air tight food containers for another few hours or you may store these in refrigerator for another couple of days.

Just heat them up in the microwave or stove top or oven just before serving.

Also you may freeze these pancakes for even longer storage, though I am not sure how long since I haven’t stored them so long. But you should be able to store the pancakes for few more days safely.

You can find more information on how to freeze pancakes here.

Below you can get the recipe for easy eggless cinnamon vanilla pancakes with self rising flour. 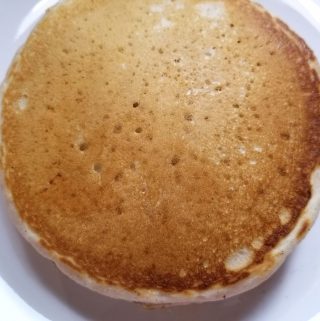 Cinnamon Pancakes With Self Rising Flour No Eggs

As you cook the pancakes, you may sprinkle a little more cinnamon powder on top of the pancakes if you wish, for even more fall flavor!